You are here: Home / Wellness / Consuming Chocolate for a Healthy Heart 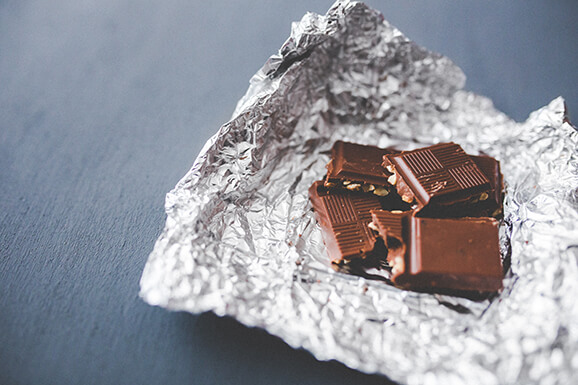 Here’s a riddle, what food item has been around since 2000 B.C., cures diseases and once was only to be eaten by royalty served warm?
That answer is of course, cocoa-pronounced (koh-koh).
The origins of chocolate go back to the pre-Olmec period in Mexico’s history, when Cocoa was first started being harvested and eaten by the local population. The word Cocoa literally means God’s food, a good indicator of just how important they felt chocolate was to their survival.
Cocoa comes from the cocoa tree and it is one of the best antioxidants on the planet. Some ingredients found in cocoa are iron, magnesium, selenium, zinc, copper and potassium. The cocoa in dark chocolate has also been shown to reduce LDL or low density lipoproteins (bad cholesterol) and to increase the HDL or good cholesterols in the body.
Of course chocolate lovers know that there are three main kinds of chocolate; dark, milk and white. Dark chocolate has little or no milk with cocoa percentages from between 70 and 99 percent and is the healthiest, while milk chocolate contains more milk and less cocoa, and white chocolate contains no real cocoa solids– which is why it’s white or ivory color and some don’t consider true chocolate.
Nature has been kind enough to have a food item that not only tastes great, but also has so many benefits; from lowering blood pressure, fighting heart disease, improving blood flow, to preventing strokes, chocolate is a wonderful addition to your diet.

The benefits of chocolate are due to the high concentration of vitamin C and antioxidant flavonoids. These flavonoids help prevent the brain and the nervous system from dulling with age, while also reducing the free radicals in our body. Researchers also find that high amounts of serotonin in chocolate helps to increase brain activity and stimulates focus. Cocoa also has blood thinning and anti-clotting properties which work in a similar fashion to aspirin, lowering blood pressure and preventing stroke.
The flavonoids are also very good at keeping the heart healthy against aging and doubles with the addition of stearic acid which helps to reduce the risk of heart attack. In a recent study in Stockholm, they studied more than 37,000 men between the ages of 45 and 79 for 10 years and found that those who ate about two ounces of chocolate per week had a 17 % lower risk of having a stroke.
It’s this ability to lower blood pressure (relax) and improve blood flow, that has people claiming that consuming chocolate has also improved their vision–by increasing the blood flow to the retina. The presence of caffeine also makes chocolate a powerful stimulant and antidepressant. Chocolate also has tryptophan in it, a known amino acid which has relaxing effects.
For the sun worshippers, you’ll be happy to know that chocolates’ flavonoids also protect the skin against the harmful effect of UV (ultraviolet) rays.
Chocolate can also help get rid of a cough you’ve been having trouble with. Cocoa contains theobromine, an ingredient that reduces activity to the Vagus nerve, the part of the brain known to trigger persistent coughs.

Along with the numerous positive benefits of chocolate, here are some downsides. Chocolate is addicting and contains added sugar and dairy. Pimples? Chocolate’s mixture of high fats and dairy might not agree with everyone’s skin. Kidney stones? Really hard to believe, but if you are already susceptible, then the oxalates found in chocolate, have been known to cause kidney stones. Nervousness? Eating a whole box of chocolates or an entire chocolate bar might just make you a little dehydrated, anxious, or even irritable.
Even with these negatives, you might want to try adding chocolate, specifically dark chocolate, to your diet to consume the benefits that it offers. The good news is that chocolate is found almost everywhere on the planet. So grab a bar and get healthy.